Wow, I have forgotten to update my blog 😮

Maeglin Liz where shown today and got Very Good. Very Good was what I where hoping for. So then her show carrier is over 🙂 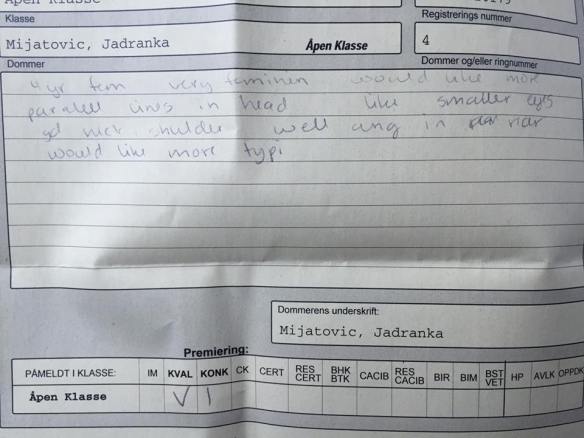 «Tuuri» HeJW-15 DeepEyes Possibly Maybe V where also shown today in Finland and got Excellent for judge Dagmar Klein. Marika also shows her other male Waara to BM1 and CACIB, don’t know the rest of the results. Tuuri has also had his debut in agility, but as far as I have understood: nothing more to tell about that at the moment *lol* A bit to much speed and tempo, and missing a brain sometime.

As you probably already know from the front page: «Skessa» DE Violently Happy got her first CAC and second best female at the international show in Bø.

And Murphy has been to a couple of more puppy shows and got BOG2 at one of them 😀 She is not entered in any more before the end of april. Then we will wait until she is a junior. Oh, and her OBI debut is sett to the end of may. Lets hope we are ready by then (if not, will do it later 😉 )

And we have had a kennel meeting last friday 🙂 Thank you all for coming!

Maybe we should try for an other one in fall? Anyone interested in HT? Or a herding weekend?